Home » What Propelled the Third Reich?

Stevenson Professor of International History emeritus at the London School of Economics and Political Science, MacGregor Knox was educated at Harvard College, the U.S. Army Infantry School, and Yale University. His other works include ‘Mussolini Unleashed, 1939-1941: Common Destiny: Dictatorship, Foreign Policy, and War in Fascist Italy and Nazi Germany’; ‘Hitler’s Italian Allies: Royal Armed Forces, Fascist Regime, and the War of 1940-1943’, and ‘To the Threshold of Power 1922/33: Origins and Dynamics of the Fascist and National Socialist Dictatorships’, vol. 1.

Sponsored by the Alfred Mizzi Foundation. The Faculty of Education (University of Malta) in conjunction with the Malta Historical Society invite you to ‘What Propelled the Third Reich?’, a talk by Professor Emeritus MacGregor Knox. Seventy years after its collapse, the brutal expansion and genocidal deeds of the Nazi regime still occasion bitter debate. How and why did Adolf Hitler’s Germany move forward without pause toward war and extermination? Not even the murderous Bolshevik-Russian empire of Joseph Stalin equalled the fierceness of National Socialism’s expansionist dynamism. And what kept Hitler’s chosen people fighting until the enemies they had provoked, attacked, or invaded literally blasted Germany flat in 1944-45? Hitler’s ally – Imperial Japan – surrendered in 1945 after seemingly light losses in relation to population, and before a single U.S. Marine or soldier had set foot on the Home Islands, whereas the German armed forces fought doggedly ‘to the last cartridge’ against both western Allies and Red Army. Resistance only flagged in the week before Hitler’s suicide on 30 April 1945; by then between seven and ten million Germans had died. This lecture will briefly survey past and current interpretations, and suggest that if we abandon the primeval superstition that revolutions must be emancipatory ‘Good Things’, Nazi Germany’s motive forces are best understood as a revolutionary process that smashed inherited social barriers, offered seemingly limitless ‘careers open to talent’ in politics, war, and mass murder, and lastingly mobilized the German people for the pitiless pursuit of happiness. 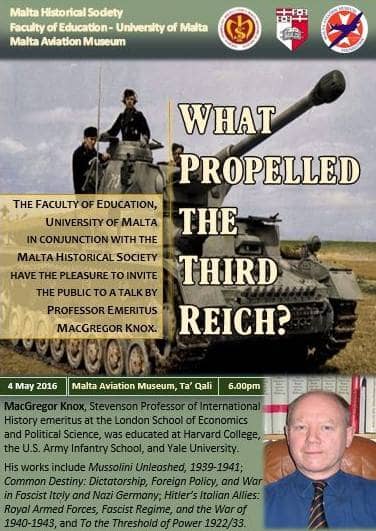