Home » The Rising of the Priests, 1775: Just a failed local revolt?

Christopher Vella, BA Hons (Melit.), MA History (Melit.) is a resident Academic at the University of Malta Junior College, lecturing in History. He studied history at the University of Malta, where he obtained a distinction in his Masters Studies. In his career, he has taught History, Sociology and Systems of Knowledge at St Martin’s College, where he was also Head of Department for the Humanities. He is currently the Coordinator of Drachma LGBTI and a member of the MUT Council. His research interests include Hospitaller studies, diplomacy, religion and culture, gender and sexuality.

Sponsored by the Alfred Mizzi Foundation. This talk aims at revisiting the Rising of the Priests of 1775, its root causes, its failures and its implications for domestic politics, and the wider European geo-political context in the late eighteenth century. The famous ‘Rising of the Priests’, led by Don Gaetano Mannarino, has excited considerable interest in local historians for its impact on the local domestic scene. It has been studied in the context of the long, eventful, colourful and tense reign of Grandmaster Pinto and the short reign of his successor Ximenes, who became well known for the austerity measures he imposed to improve the Order’s finances, that were left in a very bad state by the end of his predecessor’s rule. These, as well as simmering social tensions, clashes between local rival potentates in Church and State, and other increasing local grievances, all paved the way for this local revolt. Yet, the wider geo-political context involving rivalries between several powerful dynastic states, and the revolt’s impact on the local domestic milieu, offer interesting perspectives that can provide us with a more wholesome understanding of this revolt. This lecture will tap into contemporary diplomatic sources in Malta and Rome to highlight this ‘international’ dimension of this rebellion, and explore its relevance for domestic and European politics. It will explore why European dynastic powers took a special interest in this rebellion and what it meant concretely for Hospitaller Malta in the dangerous sea of European power politics, in what was a century of continuous dynastic conflict and shifting international power-alignments. The lecture will also attempt to analyse the various reasons that have been identified to explain this rebellion’s failure. It will probe into the wide-held belief that the rebellion’s miscarriage was indicative of a specific domestic context where the Maltese population generally showed a consistent unwillingness to support any actual rebellion against their erstwhile foreign rulers, with very few exceptions in Malta’s long history. It will also explore the view that the rebellion’s failure was indicative of wider Euro-Mediterranean trends in the mid-to-late eighteenth century. 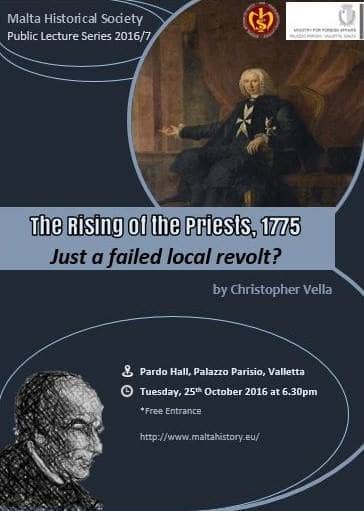