Dr Paul George Pisani is a notary public by profession, practising mainly in Gozo. He graduated from the University of Malta as Notary Public in 1985 and as Doctor of Laws in 1986. In 2010 he graduated with an MA in Mediterranean Historical Studies from the University of Malta and is currently reading for a Ph.D in the Faculty of Arts at the same University. He has followed courses in civil law and trust law as well as in archival studies both locally and abroad. He has published several contributions about Maltese legislation, history, art and literature. In 2015 he published ‘The Battle of Lepanto. 7 October 1571. An Unpublished Hospitaller Account’ which has won the Malta National Book prize for 2015 in the category of historiographical research. His works include some short biographies of prominent Gozitan personalities and contributions to journals, collective works and exhibition catalogues. He has also edited and published several unpublished works of his father, Gozitan poet and author Ġorġ Pisani, including Id-Duwa tal-Madalena (Malta, Mireva, 2000); Għana Bikri u Għana Waħħari (Malta, APS Bank, 2006) and Darba Waħda. Ġabra ta’ Leġġendi Għawdxin (Malta, Grupp Folkloristiku Ta’ Ċangura, 2015). Presently he is editing and preparing other works for publication. He is a council member on the Notarial Council of Malta, a member of the Malta Institute of Management, of the Akkademja tal-Malti and the Għaqda tal-Malti (Universita’), of the ‘Malta Folklore Society’, the ‘Sacra Militia Foundation’ and the ‘Malta Historical Society’. He is also a knight of Magistral Grace of the SMOM, a member of the Board of Governors of the Fondazzjoni Belt Victoria which runs the Il-Ħaġar museum and cultural centre in Victoria, Gozo and is currently the president of the Gozitan heritage NGO, Wirt Għawdex.

Sponsored by the Alfred Mizzi Foundation. The Order of St John was an institution depending on privilege. After the loss of the Holy Land, and with the advent of the printing press, it was constantly risking a depletion in donations by the faithful, and a loss of favour by the Catholic monarchs every time a slanderous publication was published levelling criticism at the institution. Therefore, the Order periodically commissioned official histories in order to keep the public informed of its good deeds and of how it served as a bulwark of Christendom. The official histories by Bosio and Dal Pozzo are cases in point. Abbot Luca Cenni is an obscure literary figure. The Order had been looking for a suitable candidate to continue Bosio’s ‘Istoria’ for quite some time. In fact, on 6 September 1663 Grand Master Raphael Cotoner and the council had stressed the urgency to find a competent person to be appointed as the Order’s official historian. On 1 October 1664, his name was presented to the Council by Grand Master Nicholas Cotoner as a possible candidate for the continuation of Bosio’s Istoria. Cenni was officially nominated as the Order’s official historian. A manuscript history of the Order which deals solely with the Battle of Lepanto (1571) survives in the National Library of Malta. New research carried out by the author, who has published a critical edition of the manuscript, has resulted in the discovery that Cenni had written more than the sole surviving manuscript in the National Library of Malta, and that his research was blatantly plagiarized and published by others. 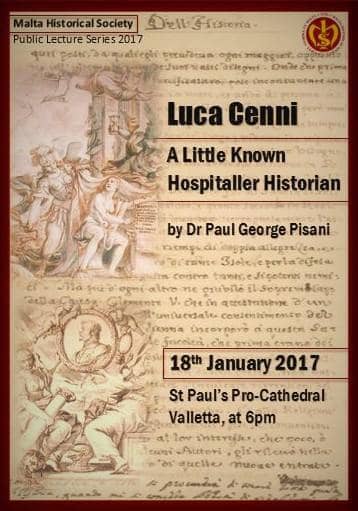