Dr Kathrina Farrugia-Kriel is Head of Research at the Royal Academy of Dance in London. Kathrina is editor of Focus on Education, and her books include a monograph on Princess Nathalie Poutiatine, 1904 – 1984 (FPM, 2020) and the forthcoming Oxford Handbook of Contemporary Ballet (with Jill Nunes Jensen). She co-edited Conversations Across the Field of Dance Studies (Network of Pointes, 2015); her writing has been published in the South African Dance Journal, Treasures of Malta, the Sunday Times of Malta, and in the Oxford Handbook of Shakespeare and Dance (forthcoming). Alongside her work at the Faculty of Education (RAD), she has guest lectured at universities in South Africa, Malta and the UK. A former member of the Executive Board of the Society of Dance History Scholars (2012-2017), Kathrina has organised conferences in London, Paris and New York, steered conferences in Australia (2016, 2018, 2020), and she curates the Guest Lectures Series for the Faculty of Education at the RAD.

Sponsored by the Alfred Mizzi Foundation. On 02 November 1933, Self-Government was abolished on the island colony of Malta. Subsequently, the British Government ruled the island until 1947, giving much rise to conflicts surrounding the island’s national identity versus its colonial rule together with the influences of the political party heavyweights and the judiciary. And yet despite their differences, Lord Gerald Strickland, Sir Ugo Mifsud and Sir Arturo Mercieca were united in artistic interest in the 1930s, gathering at the Royal Opera House in Valletta to watch Princess Nathalie Poutiatine’s ballet recitals. The ‘Russian Ballet’ productions were only brought to a stop by the first bombs that fell on the island in June 1940.What were the characteristics of Poutiatine’s art of ballet between 1933 and 1947? How did the colonial/national conflicts affect the activities of Poutiatine’s art of ballet on the island? What was the impact of Poutiatine’s contribution to the post-war fundraising effort? In view of the forthcoming book Princess Poutiatine and the Art of Ballet in Malta (Fondazzjoni Patrimonju Malti, 2020), this lecture retraces seminal dance and cultural histories discerning the impact of ballet’s contribution to the Maltese artistic culture, as well as the post-war fundraising effort, during the Self-Government abolition years. 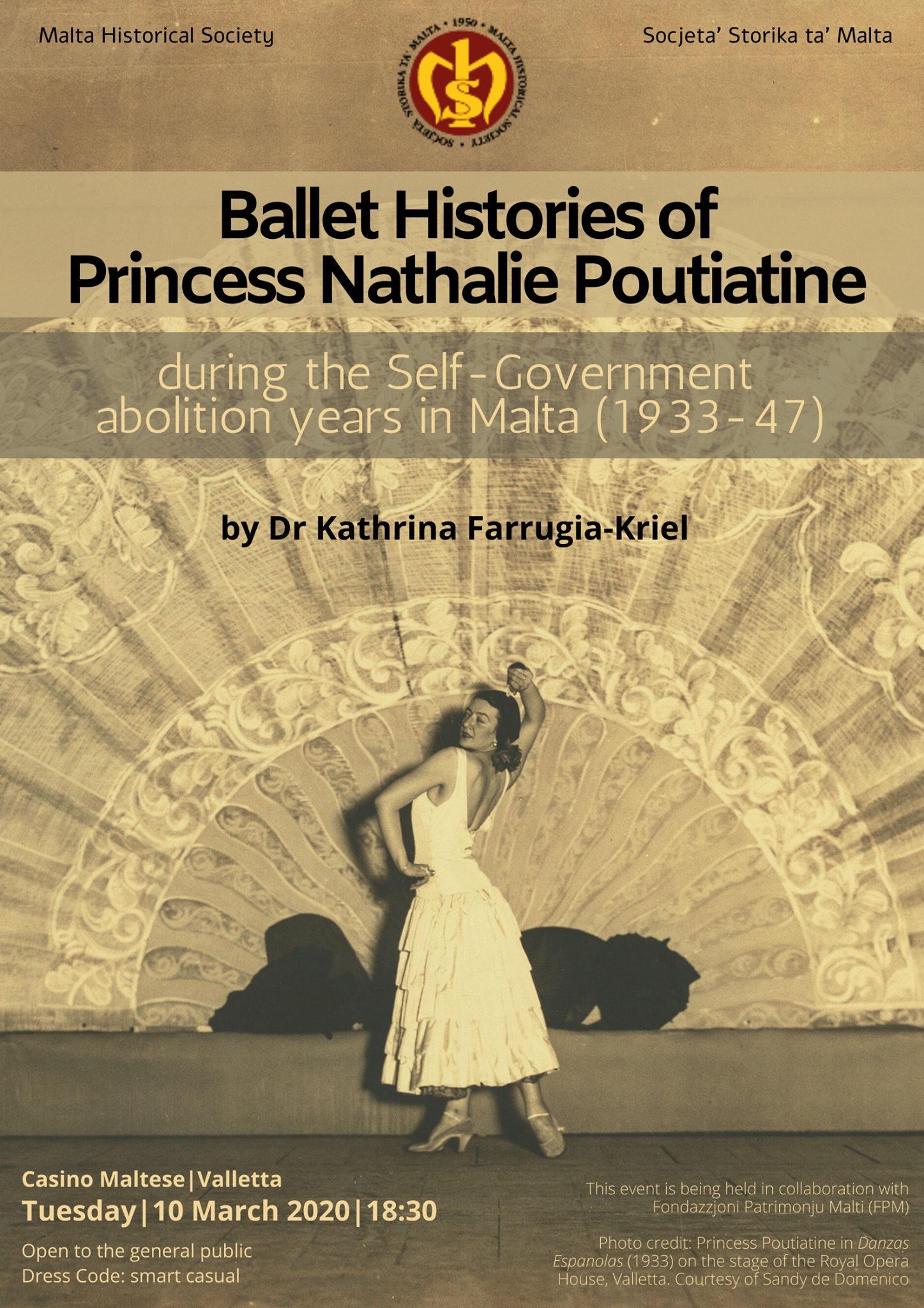